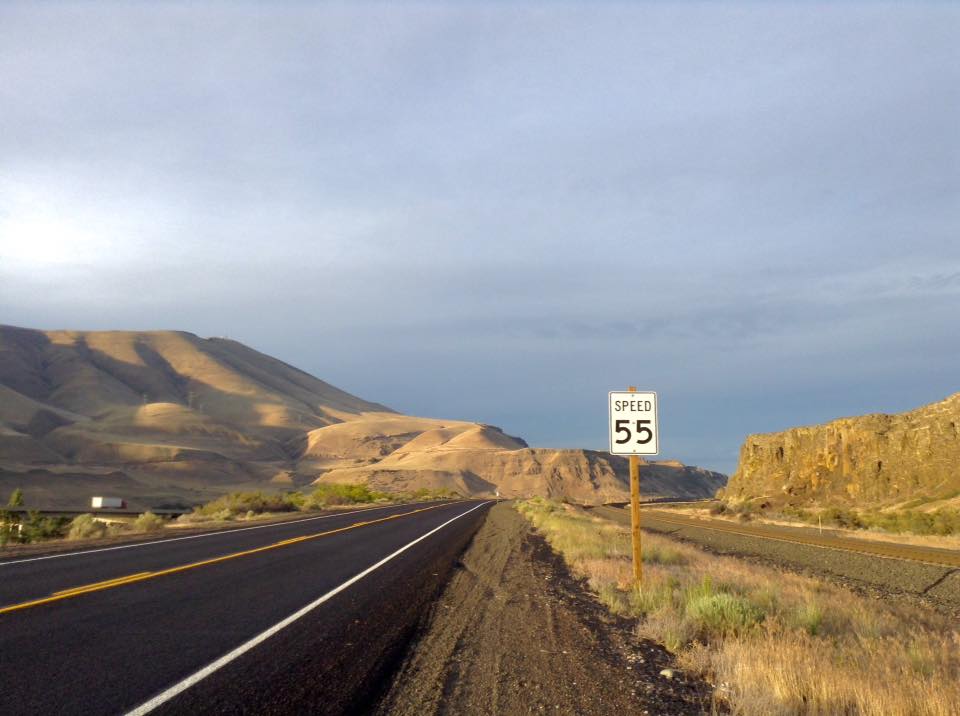 Tired of my quarantined walls, I thought I could better avoid crowds by seeking some ghost towns. Driving east away from Bridge City, it’s not long before the scenery turns to rocky formations and rolling hills. You start to see the tall transmission power towers on the horizon, looking like futuristic robots. Sometimes my soundtrack matches up just right with them marching in. There was a certain glory driving with no one else on the road.

Rooster Rock State Park seemed a fitting first stop. Lush trees along the water bank provided the perfect division of sun and shade for picnicking. I opt to veer right with my dog down a trail to the beach. I am promptly met by a stark naked elderly man. My immediate thought is that he is quite lost and dementia damaged. Not wanting to have to be a good Samaritan to a nudist in these ‘rona times, I am relieved that he seems lucid enough as he greets me, and I could hardly ignore him. I agree to take his picture. With good composition, lovely landscape and complete exposure, he is displeased I did not get a close up. He then asks me to join in the picture. I decline any cheek to cheek and tell him he’ll have to do his own zoom in. The pleasant trail follows along the river, but the heavy foot traffic of only men is what has my attention. My dog tries to sniff all their funny smells as we pass and turn back around. I decide I’ll settle for seeing the entirety of “cock rock” beach in pictures alone.

Access to the town of Bridal Veil and the waterfall with the ascetic the town was named for, was closed of course. All that remains is a lodge, cemetery and an 1886 built post office. The tiny post was in view, but only barely as a delivery truck pulled in front of it. The population is not currently one of public record.

I drive further now along the railroad tracks that whisper of hobo dreams, the evening sun illuminating the grass golden. I am so pleased to roll up on a creepy abandoned church complete with cryptic trees. As I pull over alongside the rickety fence, two big horned goat bucks rush right over seemingly as excited to see me as I them. Through the car window my lil Razzo is locked eyes with one of the strangest looking dogs he’s ever seen, since he last saw a horse. The “NO TRESPASSING” sign confirmed my thought that the floor just might collapse if I entered this wooden weathered church and with the sun now setting surely the ghosts that owned the place would be coming out.

There’s no sight of a living human soul as I drive past the old timey shops in Wasco. Some critters cross my path. I check my gas gauge, I realize I am out of options for more, so my “just enough” had better get me down the rest of the winding roads and hills. It’s beautiful and barren, and the tumble weeds fit right into the equation.

The first cross-street coming into Condon is Jew Street. I arrive just in time to the now closing gas station and with no phone reception, gingerly ask for directions. Well Fucking A, A street is just after Jew street, and I only just missed it before.

I’m in town to visit a dear friend. But she is one that thinks all my problems can be solved by horoscopes and dick, so I brace myself a bit for my stay. I am however excited to catch up, get to know her fiance, meet the puppies and stalker cat, baby turkey and hens. It doesn’t take long before a karaoke party is happening in the living room and the wigs and fur coats come out. I am a hot commodity in this small town, as I have not had four children. It takes no time before I am introduced to a guy willing to dress in his prom vest for a seafood dinner. The conversation never went any further than him disbelieving I was much older than him. One of the most boring undesirable things to have to prove to a drunk lad, I might add. Candidate number two, that I never asked for, arrives a bit later. He’s got a pleasant demeanor. We kicked back some whiskey, and I exchange mild flirtation for the sake of practice. His name is Valentino, so after a few more sloppy laughs, I do invite him to the room, only to find my host and her man already canoodling in my guest bed. Their master bedroom is all the way, right across the hall.

The next day I get to see the garden, meet the grown hens, named after Dolly Parton, Loretta Lynn, Tammy Wynette and not sure of the other. Dolly’s the blonde that stands out. I see them violently peck away at their compost lunch, along with a small brown bird that got in but didn’t get away with stealing any seed from this brood.

After a much needed jump start, the most grounded of our trio drives us to the next town over of Fossil. He warns of wandering cows, because in this county, if you hit one, you pay for it. As my pal delights in the bouncing of her own breasts, she speaks of her anti-depressant, pain killer and edibles kicking in all at once. From the backseat, I think hmm, I guess it should be a vodka day for me. Past the religious fanatic’s house we go up the hill to the cemetery. Faded wooden crosses mark some of the oldest graves, and lambs for the young. Ancestors are buried here and an empty whiskey bottle lay next to their resting place. You can see very far, with big open skies, bright sun and fluffy clouds. The temperature shifting quickly as they float over or away.

I spend more days with them then planned, because there is no reason not to. We’re in the pajama days, and it’s nice, and free to watch the sunset from the lawn. Keeping one eye also on my dog, has he has become obsessed with trying to ragdoll the little chicks. Safe in their cages, but considered at least partially as pets, sometimes given access to roam inside for bonding and indiscriminately crapping on the furniture. Food was in abundance and we got simple thrills from betting on when a bag of fermented peaches might explode. We watched “The Assassination of Versace” on t.v. late into the night and I took a rare selfie in the next morning light and felt ready to hit the road again.

I passed many windmills, and funny names for places. Farther east is the ghost town of Hardman, a site I am often trying to get to. More open skies and open land. The “modern” town of Hardman states a population of 20. Mostly living in rusted out RV’s. I felt I could be in a time warp and a horror film at the same time. I was careful not to bother anyone. The historic Hardman was said to be 9 miles down a gravel road. Perhaps it was.. As the road got rougher and the sun hotter, and with no chance in hell my phone would work, I decided no ‘man was worth this flat tire. I got out to admire the stunning view some more, take a picture and a piss. Razzo did the same, seemingly unimpressed. I turned around and saw what I thought was stunning landscape that looked like the shape of a woman. A vagina more specifically. Nature’s sense of humor.

On the outskirts of Lonerock, is the road Dead Man’s Hill Loop. I am in the wild west. Antelope is the next ghost town, population 48. The old schoolhouse and fire station still in use. You can get your tinctures at Lydia Pinkhams Compound. However this town is most infamous for being taken over by a tremendous cult in the 1980’s. You’ll have to do your own research on that madness.

Shaniko is the tourist ghost town. I wouldn’t mind getting 86’d there on better days, or worse depending on how you look at it. There are some excellent shacks. A hillbilly general store and a chapel perfect for shotgun weddings. Ideal scenery for a duel.

Bakeoven Road takes me to Maupin (pronounced Moppin’). There’s a smell of fresh tar which is strangely comforting to me because I played in it as a child. I arrive at my cabin in this legit river valley town right before dark.

“Homeward” bound, I drive through the Mount Hood Forest. It’s well into summer, but there is always snow on the peak. I crave a milkshake in Zig Zag. I have no desire to stop in Boring, Oregon. I will not go to the Boring Winery or the Boring shops. I will probably never go to their sister city of Dull, Scotland either.

Soon, I’m smack dab back in a traffic jam. Most businesses are closed, but there is enough going for a bottleneck on the steel bridge. The downtown area has been left to the growing homeless populations and protestors and feds at night. As soon as I am on a side street, I am approached by a covid-meth-face, he asks if I have a dustpan and broom to spare. I politely respond “It’s not something I regularly keep in my car”. On the final stretch of driving, I wonder why the vegan strip club has a packed parking lot in a pandemic shut down. I appreciate the murals I see, praising the healthcare workers, flying the rainbow flag and calling for justice. I take the dusty car  through a neon lit wash, freeing it of dead bugs. I wash myself off of the same, when I arrive back at Mom’s house.